The image-based objects are plate and picture. They can be used to create a visual design of your Type scene. These two objects are in fact functionally equivalent in this release, and merely serve to cause different parameter presets to be loaded.

Then go to the "Color" tab to specify the color and opacity parameters for the plate.

By default, the picture object is added with the preset chamfer and blur effects.

After that you need to specify the media source. To do this, go to the "Image" tab: 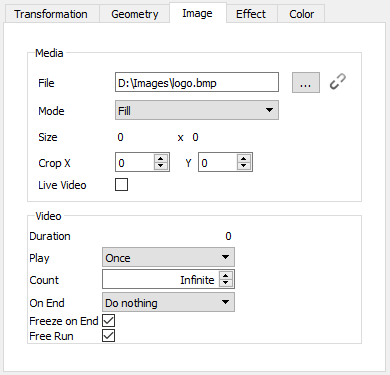 The native dimensions of the added media file are shown in the "Size" field for your information.

You can specify the fill mode for the object, selecting one of the following modes:

The "Crop" parameters define the amount of pixels to be cropped from each side of the image object. This is particularly useful for live signals as the raw output signal contains technical information in the first and last few lines as well as in the vertical intervals.

The Cinegy Type application supports the possibility of using image-based objects for displaying the content of video items (both video files and live feeds) during the playout. To enable this feature, select the "Live Video" checkbox. During the template preview this object will be displayed as a white-gray mosaic figure.

Here is the illustration of a Cinegy Type template containing an image with the "Live Video" option enabled during the playout:

All the properties and effects are similar to those of the regular image-based objects.

The following additional settings are available for a video file: