Text-based objects consist of static text, clock, marquee and roll objects. They have common transformation, content and color parameters, as well as respective effects as a preset. They can be transformed back to static text and vice versa.

The following parameters for the text-based objects are discussed here in detail:

The text for the object can be specified on the "Geometry" tab: 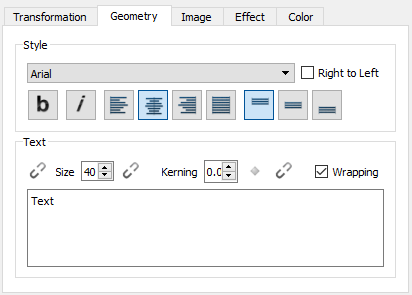 Select the “Wrapping” checkbox to split long text into lines inside the text object box on the canvas without actual line breaks.

Define the text font by choosing the desired one from the pull-down list.

Press the corresponding buttons to set the font style (bold and/or italic) and horizontal and vertical alignments of the text.

Select the "Right to Left" checkbox to enable the right-to-left languages writing style.

The results of these changes will be visible in real-time within the canvas area.

Specify the text for the marquee (roll) object on the "Geometry" tab.

Go to the "Effect" tab to specify the marquee (roll) object parameters. 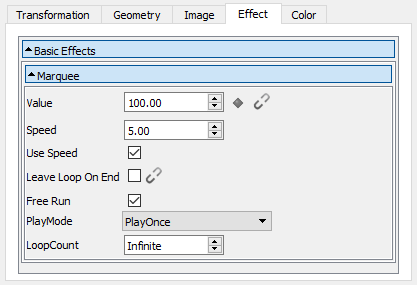 There are two animation modes for the marquee object – movement by percentage value, and movement by absolute speed.

The "Value" field defines percentage of progression of the text through the complete scrolling animation at any given point. If you look down on the timeline, you will see the "Text.Marquee.Value" channel with start and end points marked with diamonds.

At the start point the marquee value is 0% which means that no portion of the text is visible on this initial frame. When you scroll through the timeline, you will notice that the value of this field is increasing before reaching 100% at the final frame. This means that for the final frame the text has completed scrolling and the final trailing character will now have moved from view.

No matter how long the text value entered into the object is, the animation will complete within the specified time. However, this can result in text that moves at a rate that is unsuitable.

The "Speed" value specifies the speed of the characters movement in pixels per frame.

If the "Use Speed" option is selected, the characters move with the speed defined in the "Speed" field, and the "Value" parameter is ignored. This is a great way to be sure that text will move at a readable rate, although consideration of the overall display duration must now be given.

It is possible to make text scrolling follow a loop or ping-pong playback path. To do this, select the corresponding playback mode (Loop or Ping Pong) from the "PlayMode" drop-down list and specify the number of repetitions in the "LoopCount" field. To play the marquee just one time, set the "PlayMode" to play once. These operations only have an effect when working with the "Speed" mode of movement.

"Free Run" feature relates to the global loop. Let us consider its effect by an example.

Suppose you have a very long text for the marquee object. In order not to make a very long duration for the object, you can use the following trick: create a global loop at the end of the object duration and set it to loop infinite number of times.

This option is useful when used together with "Free Run" feature.

When you use the previously described trick, with the "Leave Loop On End" option enabled the marquee will leave the loop automatically as soon as its text ends and play until its end.

By default, the resolution of a newly created analog clock object is set to 10. It is possible to change this value according to your needs on the "Geometry" tab.

By default, the digital clock object is created as a running clock.

It is also possible to add a digital clock caption on the "Geometry" tab. For this on the "Effect" tab for the "Generated Clock" effect the "Use the text as" parameter should be set to "Prefix" or "Postfix" accordingly.