Cinegy Type uses a layer-based approach allowing you to add multiple objects and group them according to your needs. Layers are stacked in a bottom-to-top order, which means that the bottommost element of the tree will appear on top of all the elements displayed on the canvas.

On the "Elements" tab the objects tree is displayed. There are two ways of adding an object to the scene:

To delete an object, simply select it in the tree or canvas and press the <Del> button.

In order to rename an object, double-click it in the elements tree (or press F2 when selected) and enter a new name for the object.

You can copy objects both in the tree and on the canvas.

The "Duplicate" command can be used to create a duplicate of an object. It is available from the context menu; its keyboard shortcut is Ctrl+D.

It is possible to add an object not only to the group but one inside the other. This is useful for performing transformations to all nested objects at once rather than editing them individually. 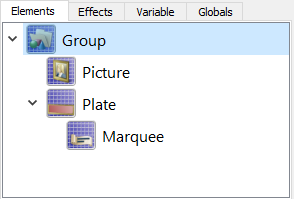 In this example the background plate can be moved to any location on the canvas and the marquee will keep the correct position on top of the plate. 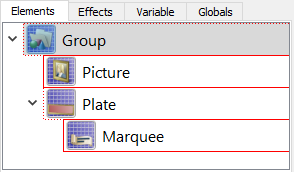 When you open the Cinegy Type template containing links to unavailable media files or missing fonts, the warning window appears: 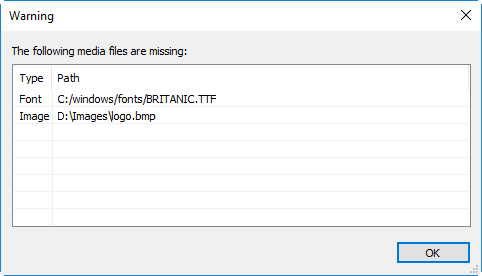 The warning window is given in the table view consisting of two columns, where the first column contains the type of the missing file, and the second column shows the path to the previously linked media file.

The objects linked to missing media files are not visible on the Cinegy Type editor canvas and are not rendered on playout. These objects can be selected on the elements panel and edited.

However, if you move the template to a different location within Cinegy Archive database, Cinegy Type will remember the path to the linked elements so that they will relink automatically.

After adding an object to the scene it is displayed on the canvas with a green rectangular bounding box. On each corner and in the middle of each side there are the transformation handles. These handles can be directly selected and used to change the bounding box attributes.

To change the object position on the canvas, click anywhere inside the bounding box and drag the object to the desired location.

It is possible to scale the object horizontally, vertically, or in both directions at once.

To rotate the object, click on the handle, situated below the lower horizontal handle, and drag to the desired position.

Besides transforming objects within the canvas you can set all parameters manually on the "Transformation" tab.

Here you can define the position, rotation, scale, and axis coordinates for the selected object or object group: 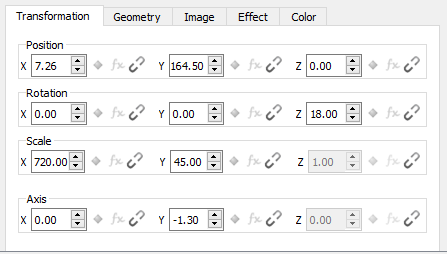 Value fields have special icon(s) beside them. Each parameter with a

"diamond" icon can be animated and parameters with a

"chain" can be set from a variable.

On the "Color" tab you can define the visibility parameters for the object and its fill color: 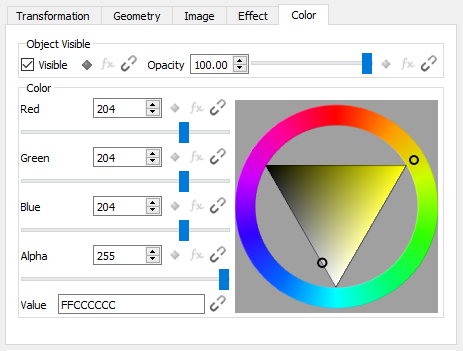 Ticking the "Visible" checkbox controls the visibility of the selected object on the canvas.

You can define the opacity of the object by moving the corresponding slider from 0 to 100% or entering the desired value via the keyboard. Changing opacity affects all the objects inside the group objects or nested inside each other.

To define the object color and transparency, move the sliders to change the values of the R, G, B and alpha channels or enter the values from 0 to 255 via the keyboard. Changing alpha value affects only the currently edited object.

You can also choose the color by specifying its hexadecimal value in the "Value" field or using the color wheel. The Hex value is RGBA ordered.