Having configured Engines, you can start creating the schedule for capturing materials. Recordings can be assigned on the "Planner" tab: 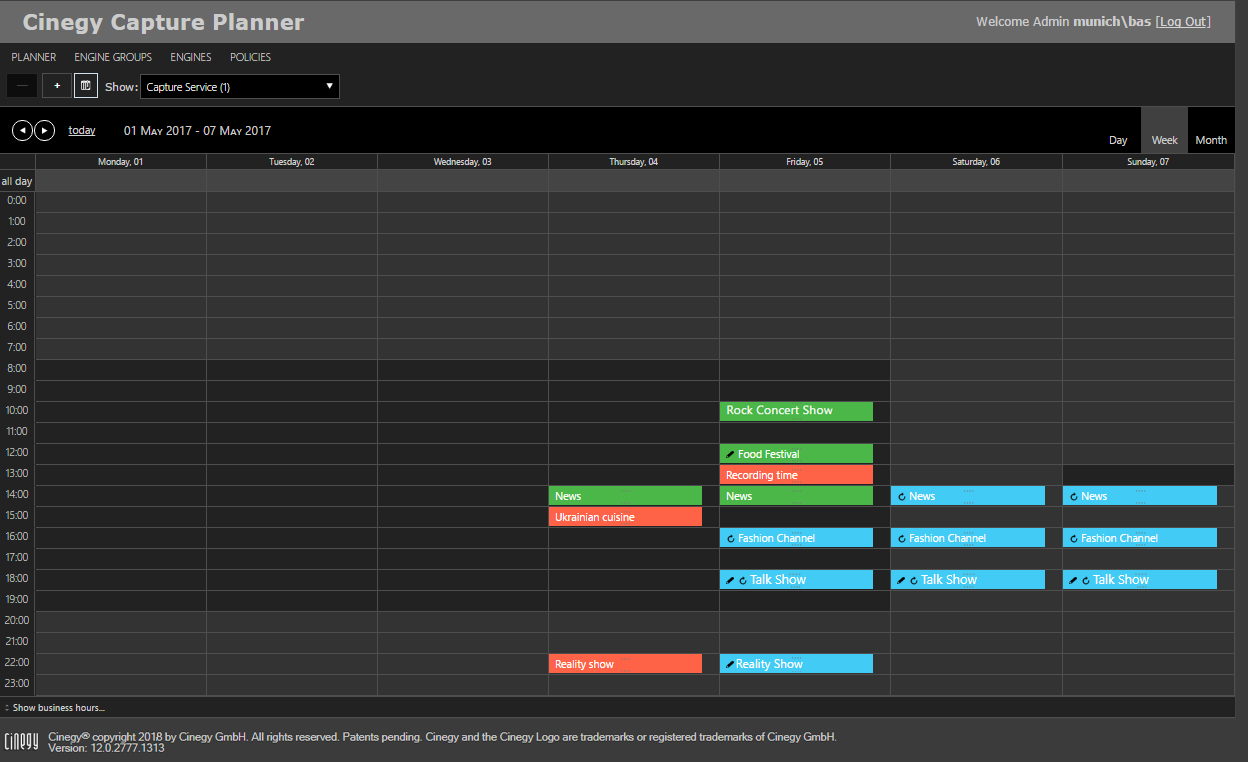 The "Planner" tab displays all the configured Engines and Engine groups as well as a time scale. 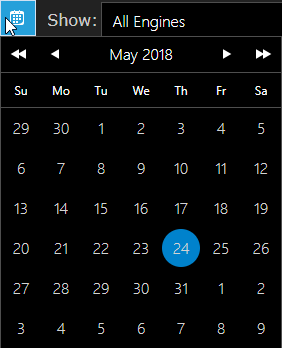 For quick navigation between adjacent dates, use the arrow buttons. To go to today’s date, use the "today" link. The "Go to today" command is also available from the empty cell context menu.

The schedule can be displayed in day, week, or month scale. Select the corresponding setting in top right corner of the table view: 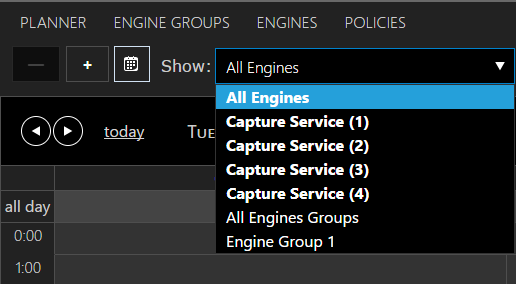 To increase/decrease the scale spacing, use the

New recordings are configured on the "Planner" tab. They can be planned individually for a certain Engine as well as for the whole Engine group.

Scheduling Recording for a Single Engine

Choose the desired Engine from the "Show" drop-down list. The time scale will show only the selected Engine. To plan a new recording, double-click the required time cell; the following window will appear: 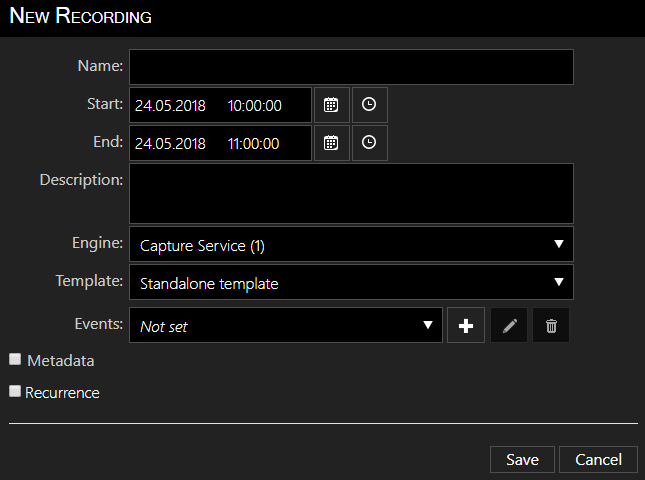 This command is also available from the context menu appearing when you right-click an empty cell in the table view:

In the "New Recording" form, specify the recording name. The Engine for processing should be selected from the "Engine" drop-down list. The start and end date, as well as the time for the recording, can be specified using the corresponding calendar and time view popups or entering the desired values via the keyboard to the dedicated fields. You can also add a description to your recording into the corresponding field. Use the "Template" drop-down list to select the Engine template for your recording session.

Cinegy Capture Planner Manager allows users to add events to the recording task which are controllable via the secondary events through Cinegy Event Manager.

In the window that appears, set up the parameters for your secondary event:

Having specified the needed parameters, press the

to discard the changes.

Check the "Metadata" option and specify the following parameters:

When Traffic ID is specified (not empty), Cinegy Capture searches for the node in Cinegy Archive database with the most recent modification date and the corresponding Traffic ID assigned. When a Placeholder Roll with the specified Traffic ID is found, media is recorded to the placeholder.

In case no placeholder with the corresponding Traffic ID is found in the Archive database, a new Roll is created as a target one for the recording session in the usual way.

To repeat the same recording more than once, select the "Recurrence" checkbox and set up the recurrence parameters on the panel below the checkbox:

Having configured all the parameters, press the "Save" button to create the scheduled recording. 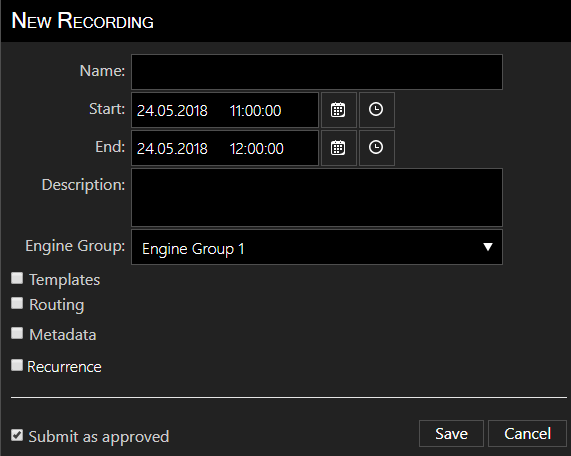 Choose the required Engine group from the list of available Engine groups and specify the name, start/end date as well as description of the recording.

Check the "Templates" option and use the drop-down list to select the Engine templates for your recording session:

Select the "Routing" checkbox and enter the source name to switch the input stream to this source for the relevant Capture Engine:

Configure the "Metadata" and "Recurrence" parameters.

Having configured all the parameters of the recording being created, press the "Save" button to create the scheduled recording.

The block representing the scheduled task will be located on the time scale according to the specified time. The task scheduled within the specific Engine group is additionally displayed with the following icon: 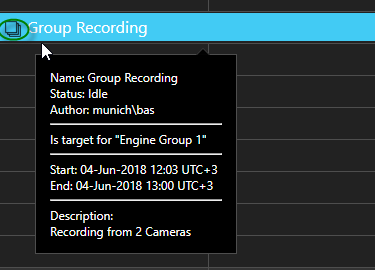 In the recording description the information on the target group the task was created for is provided.

If the date or time defined is already expired, you will be warned about it with the following alert message: 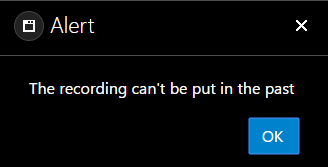 If the time you have defined overlaps another planned recording, you will be warned about it with the following alert message: 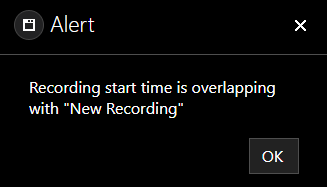 The recording blocks differ in color depending on the status of the recording.

Once the recording has been created and marked as approved, it is displayed in blue, indicating the idle status. This means that the recording is being initialized: 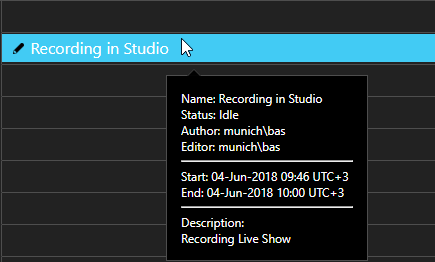 If the created recording has not been approved yet, it is displayed in yellow until it is approved by operator: 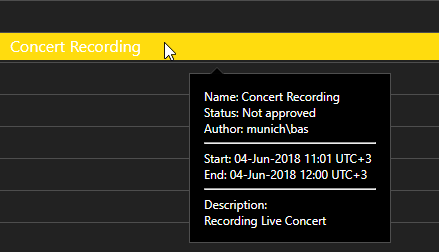 Light-blue block coloring means that the recording is waiting to be processed at the specified start time: 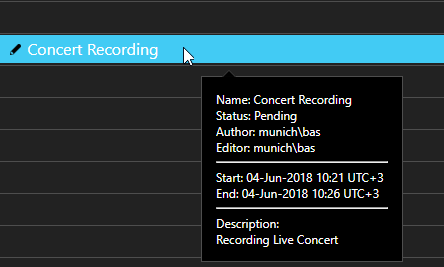 Orange block coloring indicates that the recording is being processed: 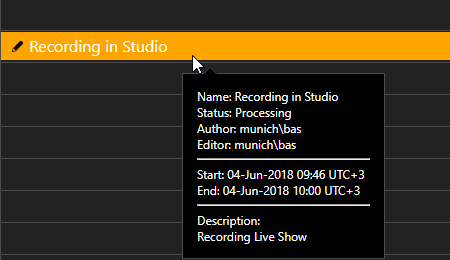 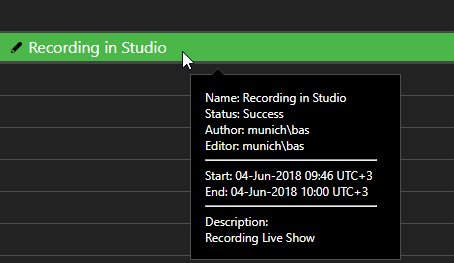 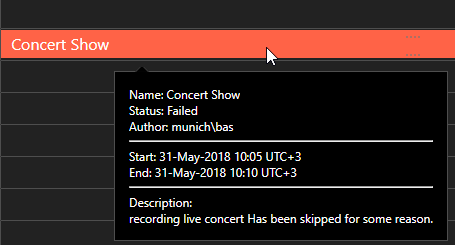 To edit a recording, double-click it in the schedule or choose the "Edit" command from the recording context menu; the following dialog appears: 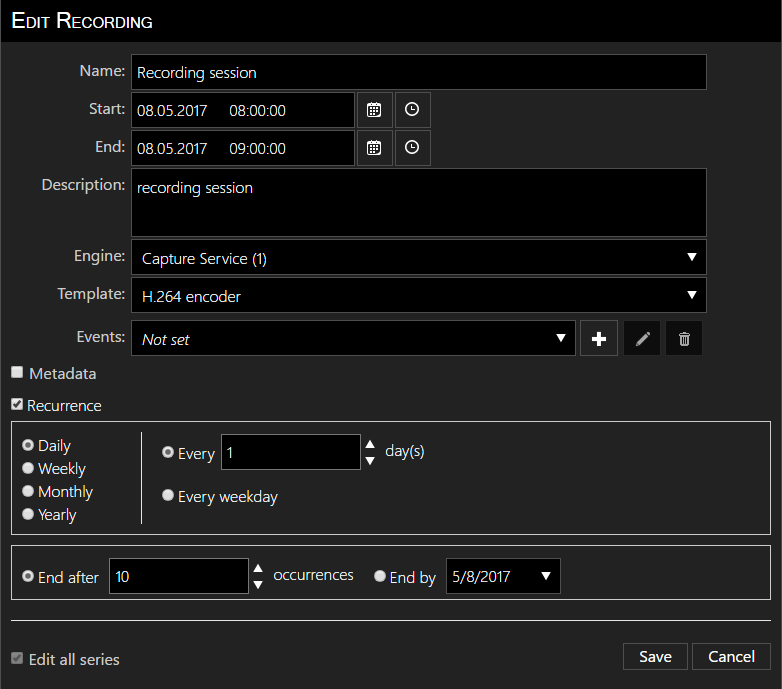 In the "Edit Recording" dialog define the new recording parameters.

To edit all the instances of the recurring recording at once, use the "Edit all series" context menu command.

Press "Save" to apply the changes.

icon appears on the recording block indicating that the recording has been edited and the tooltip will display the information about the user who has edited this recording: 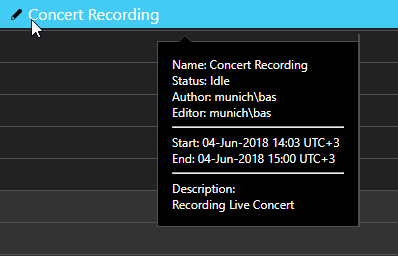 For a quick change of the start and end time drag the top or bottom margin of the block, the cursor will turn into

to change the block size. The whole block can be rescheduled via dragging to the desired position or even to another Virtual Engine; while dragging, the cursor turns into

It is possible to change/extend the end recording time for live shows, even if it has already started. It is not allowed to enter the end time earlier than the current time or intersecting with the start time of next scheduled task. It cannot be set less than 5 seconds before the start of the next task.