The compacted layout represents the preview window on the left. The active engine template name and the field to define the file name pattern are displayed on the right. Capture engine controls are located below.

The active engine template to be used for your recording can be chosen from the drop-down list of the available templates: 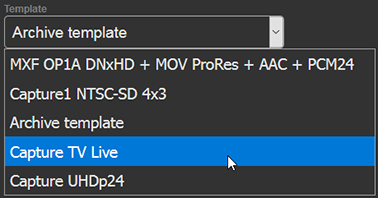 In recording mode, the total duration of the current recording is displayed in the engine caption as follows:

The following controls are used for Capture engine recording management: