The Cinegy Convert Watch Service is used to perform repetitive tasks automation. A number of watch folders can be configured to monitor Windows OS network shares and Cinegy Archive job drop targets. These watch folders automatically submit transcoding tasks according to the pre-defined settings when new media are detected.

To add a transcoding task manually, press the "Add task" button on the "Queue" tab: 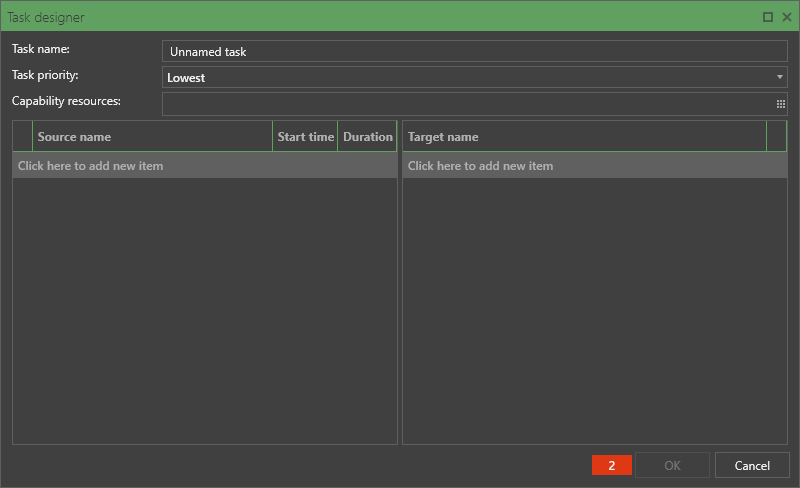 Define the required Cinegy Convert task properties that are described in detail below.

In the "Task name" field, specify the name for a task to be displayed in the Cinegy Convert Monitor interface.

Tasks with higher priority will be taken first by Cinegy Convert Agent.

button to open the window for capability resources selection: 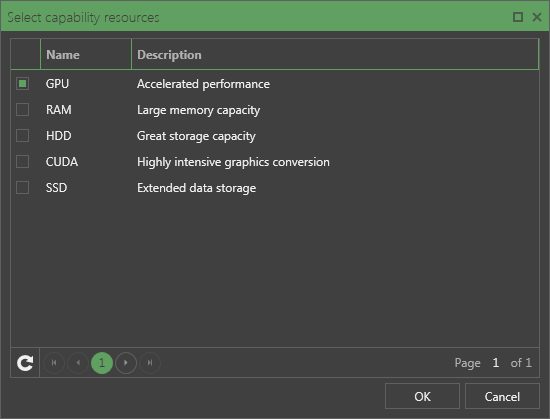 Here select the name of the resource that is needed for the conversion job being created and press "OK". It is possible to select multiple capability resources.

Alternatively, you can start typing in the name of the capability resource directly in the "Capability resources" field; while you typing, the auto-complete feature provides suggestions starting from the letters you have already typed in:

The task with the defined capability resource(s) will be taken by the Cinegy Convert Agent Manager that has the same resource(s) assigned.

Define the source materials to be converted by clicking the gray field within the source panel: 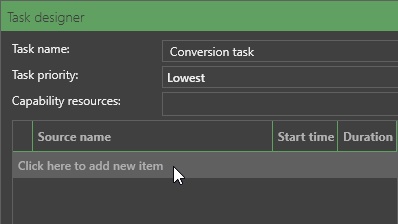 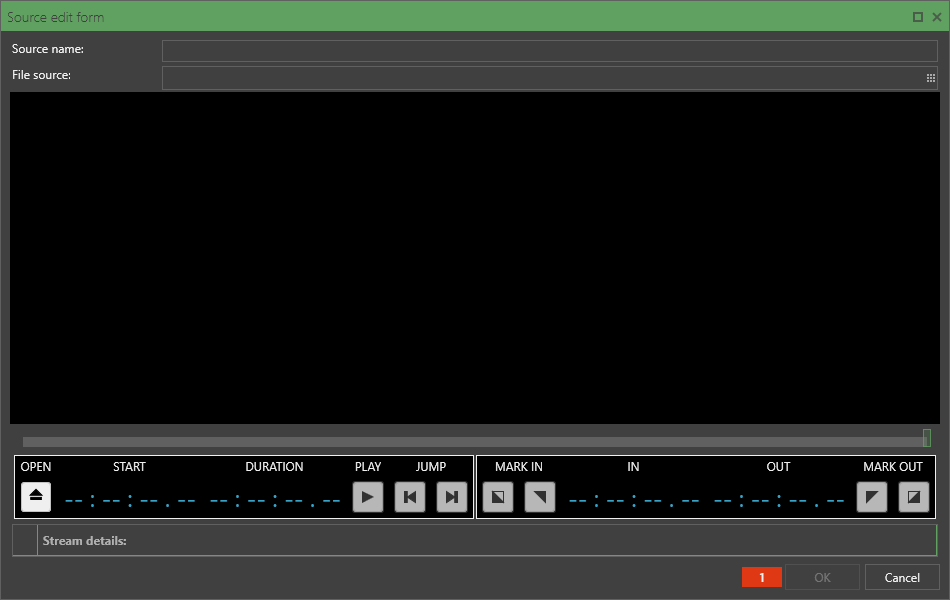 A source can also be loaded by pressing

in the "File source" field over the preview monitor.

The loaded source preview is shown on the preview monitor: 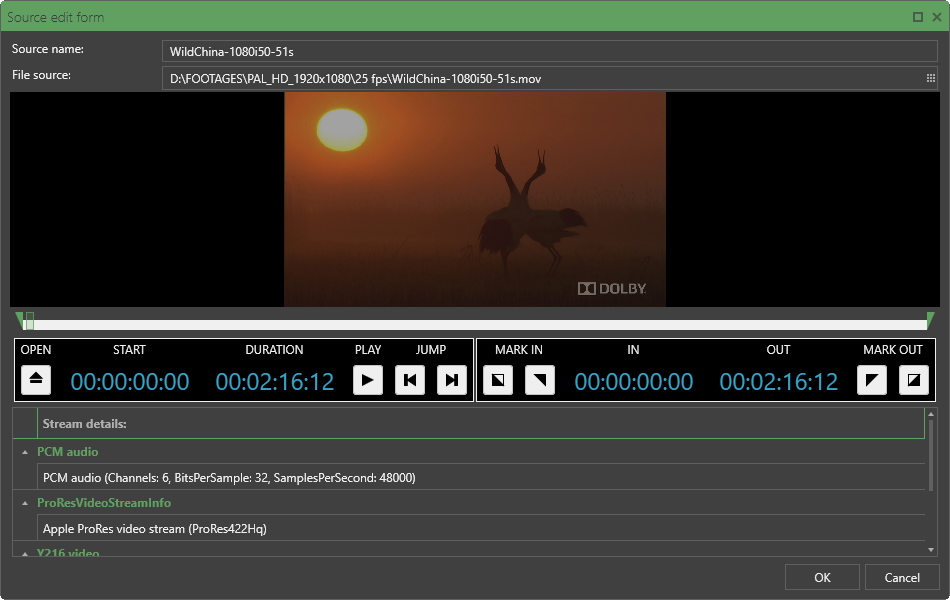 Below the monitor there are controls for setting In and Out points. This enables processing only the defined part of video material.

To define the part of video for transcoding, go to the desired starting point of the video either by pressing the "Play" button and stopping at the desired position or by entering the desired time value in the "IN" field:

Then go to the desired end of the video fragment by pressing the "Play" button again and stopping at the desired position or by entering the desired timecode in the "OUT" field.

The duration is calculated automatically. 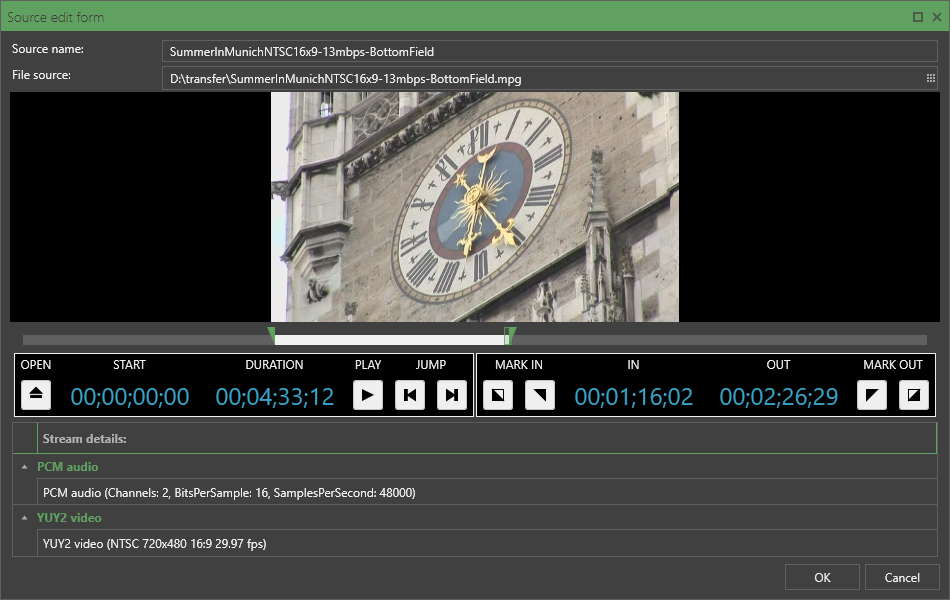 Press "OK" to finish defining source media material; the source will be added to the list: 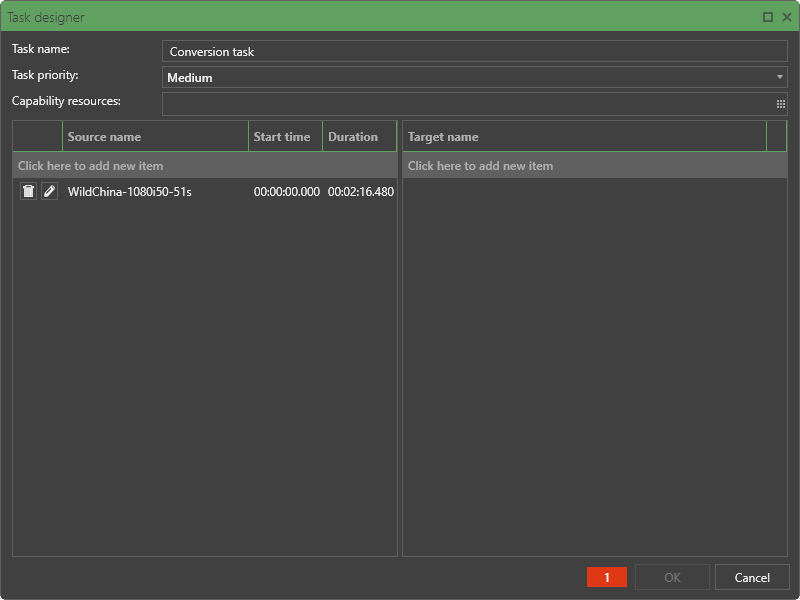 Several sources can be glued together during the transcoding task and can be added by clicking the gray filed and adding a source file in the same manner.

Set the targets defining the task output by clicking the gray field within the target panel: 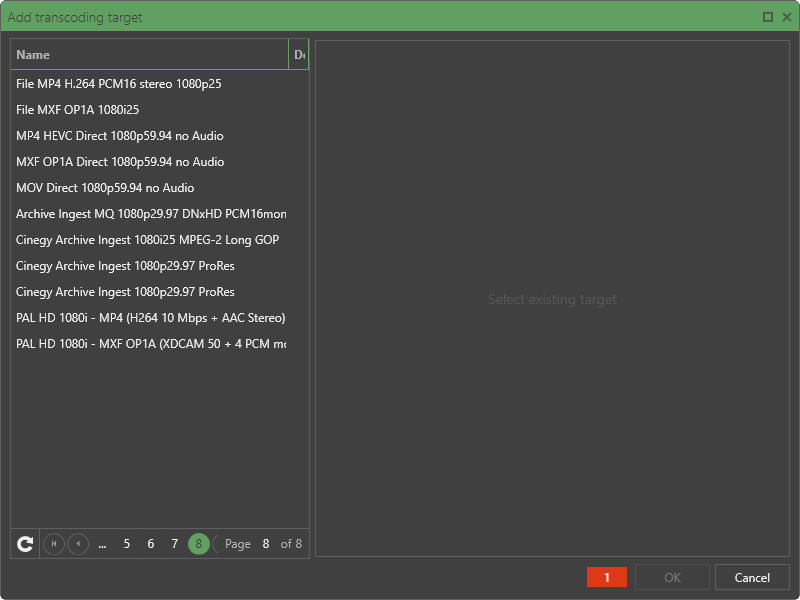 Here, from the list, choose the corresponding profile prepared using Cinegy Convert Profile Editor. its settings will be open on the right-hand panel of the dialog allowing you to make changes in the selected profile, if needed. Then press the "OK" button.

Several output targets can be added to the transcoding task defining different output formats like MXF, MP4, SMPTE TT, etc. To do this, invoke the "Target edit form" dialog again and choose another profile.

It is possible to add any source with any target schema. The automatic mapping with resampling and rescaling will be applied to the source media to fit with the defined target schema.

If there are some inconsistencies between source and target media formats, the yellow indication will be displayed. Hovering the mouse pointer over the yellow indicator displays a tooltip with the information on what changes will be applied to the source media:

To edit a target from the list, use the

button on the right of the target name.

To delete a target, use the

The "Queue" tab lists all active transcoding tasks registered in the Process Coordination Service database with their statuses and progress:

When a task is being processed by Cinegy Convert, its progress bar displays two independent processes:

The color of the "Status" column indicator corresponds to the transcoding task state:

When the task processing is completed, its status turns green and after several seconds it is removed from the list of active tasks.

Tasks processing is performed in the order of task priorities. The priority of a task is displayed in the dedicated column.

Hover the mouse pointer over the status cell of the specified task to see its full status description:

It is possible to change priority for tasks being currently processed by a Cinegy Convert Agent Manager by right-clicking the desired task and choosing the required command from the "Priority" menu:

The tasks with lower priority will be suspended and higher priority ones will go to the top of the tasks list and continue being processed in the first instance.

Tasks being processed can be paused/resumed or cancelled. To do this, right-click the desired task in the list and choose the corresponding command from the "State" menu:

To resume the paused task processing, use the "Resume task" command.

If a task has not been taken for processing by any Cinegy Convert Agent Manager yet, it can be suspended. To do this, right-click the desired task and use the "Suspend task" command from the "State" menu:

To bring the task back to queue, select the "Queue task" command from the suspended task right-click menu.

You can also create a copy of an already completed transcoding task in the "History" tab in the similar way.

Filtering of the task queue is supported, which allows user to hide tasks with a specific statuses from the list to make it easier to find and manage them. Use the

icon in the "Status" table column; the following dialog box appears allowing you to choose the statuses to be displayed: