To work with News Program Manager, it is necessary to create a News Program first. To do this, use the "New" > "New News Program" command from the folder context menu in the explorer window: 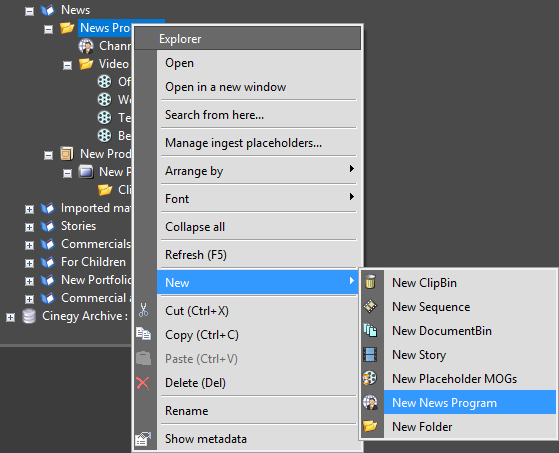 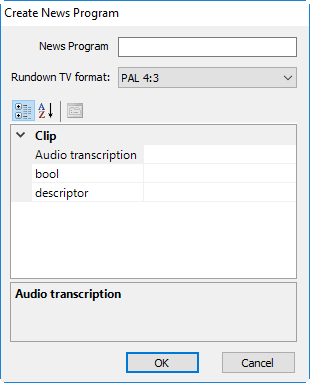 A News Program is the container for the Stories with video, audio and text material inside.

The existing in the Rundown Story can be easily replaced with a newswire. To substitute the Story, select the newswire and drag-and-drop it to the desired location holding the Ctrl key down. When overwriting the Story, the original Type, Target Duration and Author is copied into the "Create a Story" configuration dialog so there is no need to type it again: 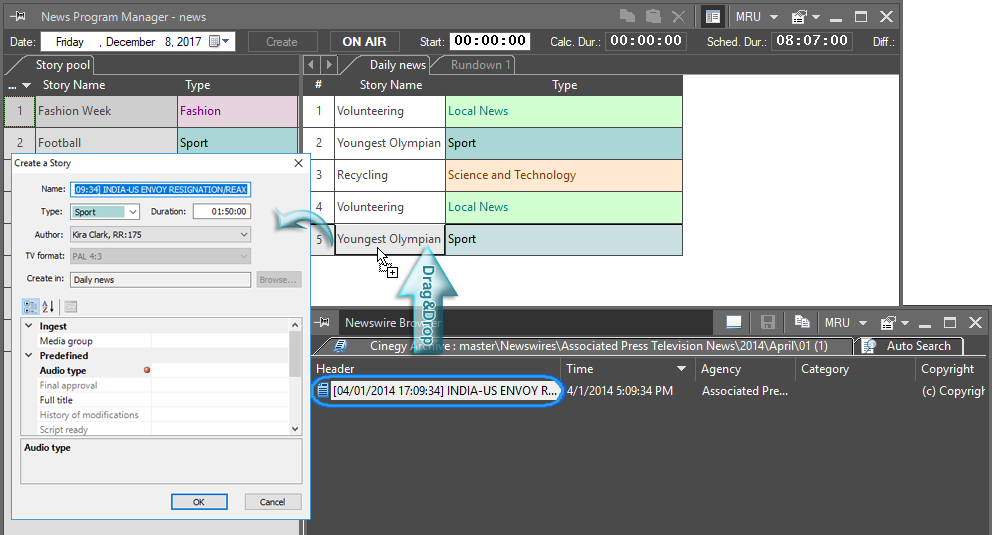 The table view of the News Program Manager interface provides a convenient way to work with Stories:

The pool displays the following Story parameters by default: Story name, icon displaying the status, author’s and presenter’s names, status, calculated and target durations. It is also possible to enable the display of the "Type", "Title" and "Source" columns.

The rundown contains the same Story parameters as well as the time of planned and actual Story start. All of these columns are shown by default. The "Scheduled Start" column displays the planned start of each Story according to the calculation of values in the "Target Duration" column. If the target duration of the Story is not defined in Story Editor, the calculated duration value is used instead. When on-air mode is on, the "Actual Start" column displays the real start time for Stories being played back and for finished ones as well as the estimated start time for the rest of the Stories in the rundown. When on-air mode is disabled, no values are displayed in this column.

Stories in the pool and rundown are numbered according to the order of their adding to News Program Manager. However, it is possible to sort Stories in the pool by clicking the desired column caption. To place the sorted Stories in the reverse order, press the button. For example, Stories sorted by the author’s name are arranged alphabetically, and pressing this button results in applying a reverse alphabetical order rule. The duration value columns are arranged from the shortest to the longest ones, and pressing this button invokes the opposite sorting rule. The reordered Stories preserve their numbering. To restore their order to the original state, click the caption of the "#" column.

All the columns in rundown are selected by default; remove the selection of the columns you do not need to be displayed. It is also possible to define the order of the columns with the help of the "Move up" and "Move down" buttons. To restore the default settings, press the "Reset to default" button.

Depending on the status, Stories in the pool and rundown have color-coding and corresponding icons making it easier to work with them.

The following statuses, icons and color coding are displayed in the rundown only when on-air mode is enabled:

When a Story has the "Locked" status, it is possible to see the user editing it by moving a mouse pointer to the "Status" column of this Story; a pop-up hint will appear indicating the user’s name:

Moving a mouse pointer to the "Status" column of the Story also allows you to view a pop-up hint with the name of the user having set the "Final approval" mark for the Story as well as the approval date and time:

The workflow steps are used until the Story gets final approval, that is why they are displayed in the "Status" column. They also have their own coloring to make the work with them more convenient. For example:

If the calculated duration of the prepared Story does not match the target duration (accurate to second), its value will be shown in red:

The context menus for the pool and rundown are different. The following menus appear when you right-click the pool or rundown panel respectively:

The following commands are available from the context menu:

A quick way to add the Story is dragging the existing newswire item into the News Program Manager either to the Pool or Rundown area. The newly created Story will be opened in the Story Editor and become active. The Story Data fields including Name, Title, Synopsys and Source will be populated automatically. The Transcript block will contain the text of the Story: 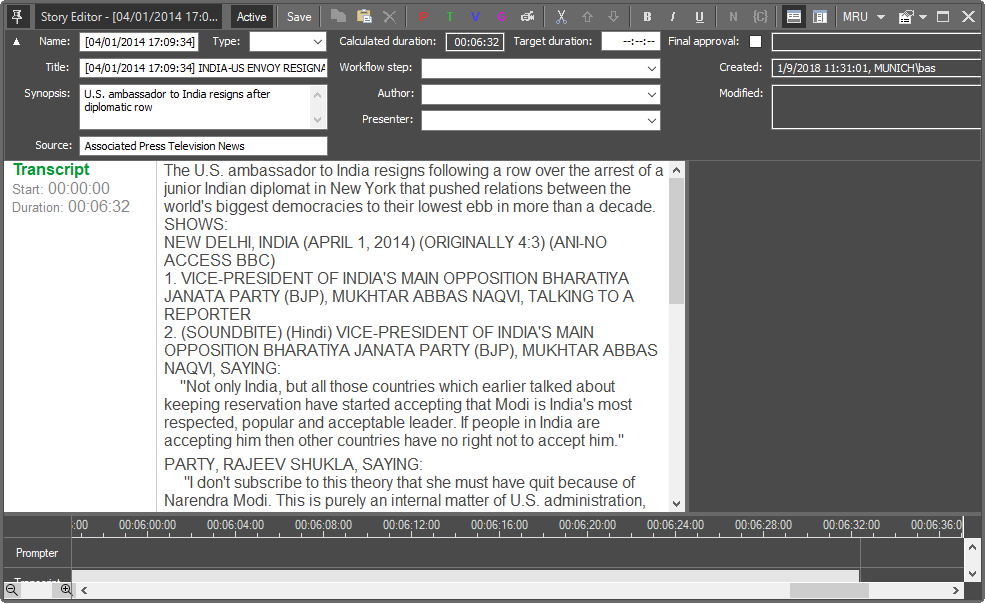