The script panel contains the entered information about the Story material: words of the narrator, dialogues, titles, commentaries, etc. It is divided into two columns, where the first one displays the block caption in the following order:

The duration of each block is calculated automatically as described below.

The second column contains the text of the blocks as well as the information about video and Cinegy Titler templates.

All the information is contained in the corresponding text blocks. Each block of a particular type has its own color. The description of the following available block types is given below:

Prompter block contains narration intended to be read by an anchorperson.

The duration of this block depends on the presenter’s reading speed.

Transcript is a block containing spoken words of those appearing on screen.

This block is included to a newly created Story by default. Its duration is calculated according to the default reading speed value.

Voice-over is a block with commentary (usually off-screen) recorded on top of the video material.

The duration of this block is calculated automatically depending on the narrator’s reading speed.

This block can be used in the Story script in two ways: it can contain either simple text (Graphics text) or a Cinegy Titler template (Graphics 1…​5), created via the Cinegy Titler application.

The block with text has zero duration. Its type cannot be changed.

The title of the block with a Cinegy Titler template corresponds to the Graphics track on the Story Editor timeline where this template is placed:

The duration of the block is equal to the template duration.

To add a Cinegy Titler template, open a DocumentBin containing it and drag-and-drop the template to the desired position on the Story Editor timeline graphics track. The position will be highlighted while dragging.

The template editing window can also be launched by double-clicking the Graphics object on the corresponding track in Story Editor.

This block cannot be created manually, it is created when video is dragged-and-dropped to the Story; once the video is removed, the block is automatically deleted. The title of the block corresponds to the Video track on the Story Editor timeline where the video is placed (Video 1…​3):

The block contains the object icon and the name of the video material. The duration of the block equals the video object duration. A video clip can be dragged-and-dropped to any position on the timeline. The position will be highlighted while dragging:

It is also possible to drag-and-drop the video material to the assets panel. In this case the position in the list of other objects will be highlighted with a horizontal marker.

On both timeline and script panel, if a video file is dragged-and-dropped to the position where a different video object has already been placed, it will be replaced with the new one.

On the script panel this block contains an object icon (clip, master clip, Sequence) and its name. It cannot be edited, its type cannot be changed. To view a clip, double-click it on the assets panel or timeline; it will open in Clip Viewer. It is also possible to view or edit the Sequence – double-click it directly in Story Editor and it will open in Cinegy Desktop Timeline for editing. To replace one video with another, drag-and-drop the necessary file to the Video block on the script panel or timeline.

To add a clip (master-clip) to your Story, locate the desired object in the ClipBin (Roll) and drag-and-drop it to the desired position on the timeline video track, to the script panel or assets panel. The position will be highlighted while dragging. 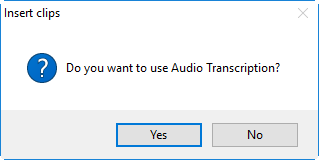 If you press "Yes", a new Transcript block will be created. It will be grouped with the inserted clip and have the same duration and timecode as the clip.

It is also very convenient to add a clip to the Story via drag-and-drop directly from the Clip Viewer window or using the "Insert" button:

You can either insert the whole clip, or set In and Out points and then insert the fragment between them. The clip will be added to the selected video track in the activated Story.

To add a Sequence, locate it in the explorer tree and drag-and-drop it to the desired position on the timeline video track, to the script panel or assets panel.

This block is created when a Live Input item is added to the Story. Once it is removed, the block is automatically deleted. The title of the block corresponds to the Video track on the Story Editor timeline where the Live Input is placed (Live on 1…​3):

When a Live Input item is added to the Story, the "Live Input" preferences dialog appears: 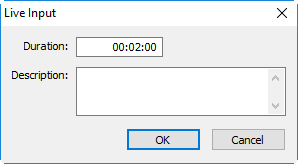 In the "Live Input" dialog the following parameters can be specified:

The "Live Input" dialog can also be launched by double-clicking either the left column of the live block on the script panel, or the timeline, or the assets panel.

A Live Input item is placed at the time slider position. It is possible to move it or place on a different video track on the timeline via drag-and-drop. The position will be highlighted while dragging.

On the script panel, the block contains the object icon and description.

Depending on your Cinegy Studio playback configuration, a live signal goes from the defined input device or from IP (if the "Use RTP/UDP input" option is enabled) to output without being affected by Cinegy Studio.

When a Live Input item is played back in the viewer, the camera icon is displayed against the black background. The Live Input item can be copied and pasted with the corresponding context menu commands or the standard Ctrl+C and Ctrl+V shortcuts. If the timeline is used to perform these actions, the item is pasted to the time slider position of the selected video track. Alternatively, it can be pasted after a certain script block, if it is selected on the script panel. If the item is deleted, a gap of the corresponding duration appears between the previous and the following object on this track.

To add a new script block, use the corresponding button on the toolbar:

Alternatively, you can right-click the left column of the script panel and choose the desired block type from the context menu that appears: 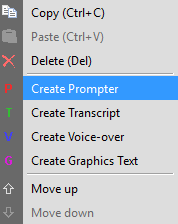 It is possible to create several blocks of each type. When created or copied, they are placed in particular order on the timeline and script panel. The insertion position of the newly created block depends on several factors: the block type, whether the currently selected block is on the same or a different track, and whether another block is placed at the insertion point. If no block is currently selected, the playhead position will be taken as the new block start. If the type of the block being created matches the type of the selected one, then the new block will be created directly after the current one. Otherwise, the selected block start will be considered the start of a new block.

Fill in the necessary text blocks of your script: 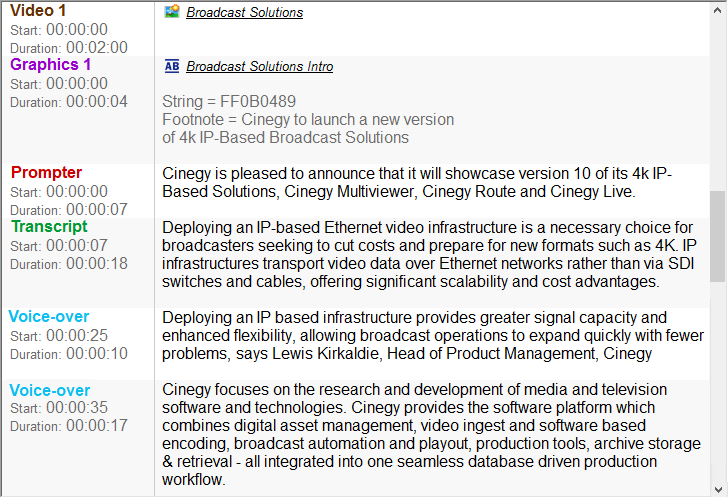 A new script block can be created with the information already present in one of the existing blocks. To do this, highlight the needed text and press the corresponding script block button. The highlighted data will be automatically inserted into a new block. 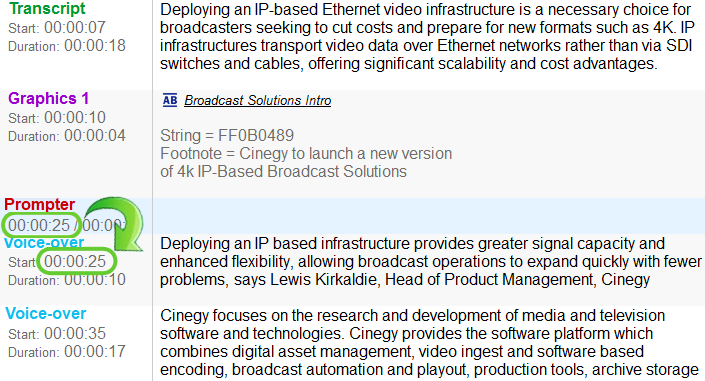 The default font (Arial, regular, size 12) can be changed according to your requirements. To do this, use the "Font" Story menu command: 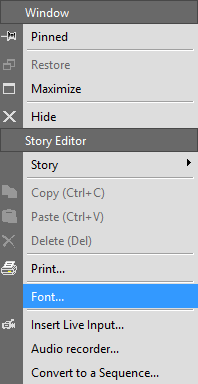 The following dialog appears allowing you to adjust the font settings: 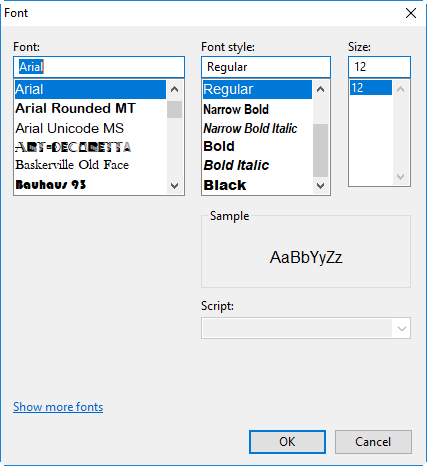 Define the font family and style using the corresponding drop-down lists. Specify the font size via the keyboard. The selected font preview is displayed in the "Sample" field.

Press "OK" to save the changes and exit the "Font" dialog.

The formatting can be performed by using these commands separately or in any combination.

Thus, it will not be included in the time calculation:

When the text is enclosed in braces, it will also be marked as a comment. The comment color is the same as the color of the name of the text block containing it.

If you need to add comments for author’s personal use – to keep drafts, make self notes, etc. – put the text either inside double slashes or between double slashes and the end of the text block:

The text will be displayed in dark gray color. It is not included in the time calculation, it will not be printed or sent to Cinegy Prompter. If the comment in braces is placed inside the comment in double slashes, it becomes a part of it:

To convert a comment back into the regular text, simply remove the slashes.

The spell checking option enables user to check spelling in the script blocks. By default, the spell check is active, indicating misspelt or unknown words with a red wavy underline.

To correct the spelling, right-click the underlined word in the script block and choose the appropriate variant from the suggestions list: 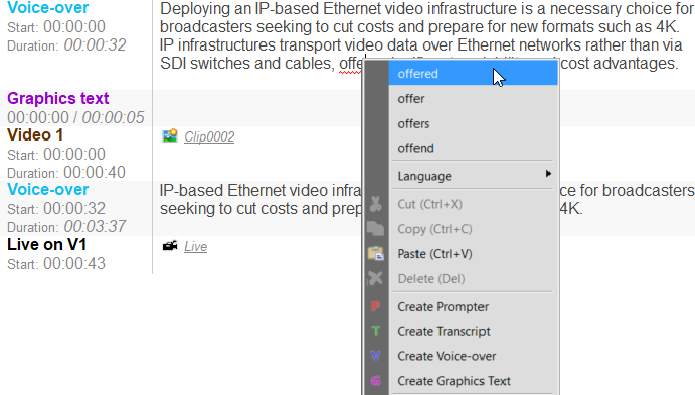 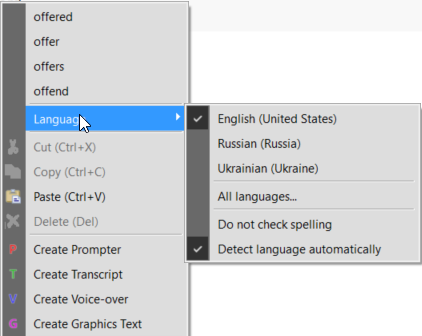 In the example above, the split block will look as follows:

It is also possible to merge adjacent blocks of the similar type. To do this, simply place the cursor at the beginning of the second block to be merged and hit the "Backspace" key.

The other possible way to perform these actions is to right-click the left column of the text block on the script panel and select the necessary command from the context menu:

It is possible to change the real duration of a block if necessary. Double-click a block in the left column on the script panel or timeline to launch the "Block Properties" dialog and specify the desired duration value in the "Real Duration" field:

As a result, the automatically calculated duration of the text block is replaced by the specified value, and the reading rate of the person reading the text is recalculated according to the time indicated in this field. The changed time is displayed on the script panel in italics:

To reset automatically calculated duration of the text block right-click the left column of the blocks and select the "Clear Real Duration" command:

Alternatively, the real duration can be changed by trimming text blocks on the Story Editor timeline. A mouse pointer hovered over the edge of a block turns to a trimming tool.

The calculated duration on the data panel refreshes automatically.

As the Cinegy Prompter engine scrolls the text with speed respective to the reading rate from 10 to 2000 words per minute, if the recalculation due to the change of real duration brings the reading rate beyond these limits, the text scrolling during playback automatically becomes equal to this min/max value correspondingly.

In vertical view of Story Editor the text block with modified real duration will be marked with a red bottom line of the block; the changed time value is also displayed in italics: 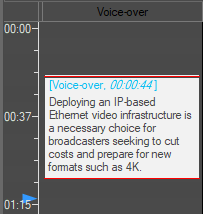 A "Print" dialog will be launched allowing you to set up the script printing options along with other common print settings: 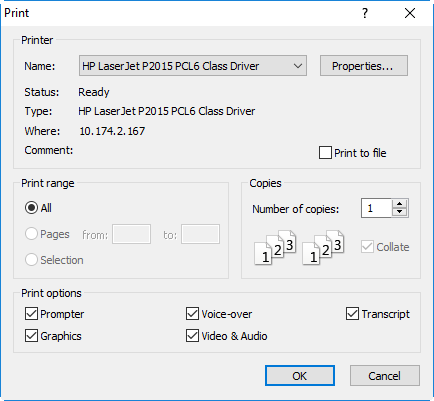 In the "Print options" group all the block types are selected by default. If you do not need to print any of them, remove the selection of the corresponding checkbox(es).

The printed document looks as follows: 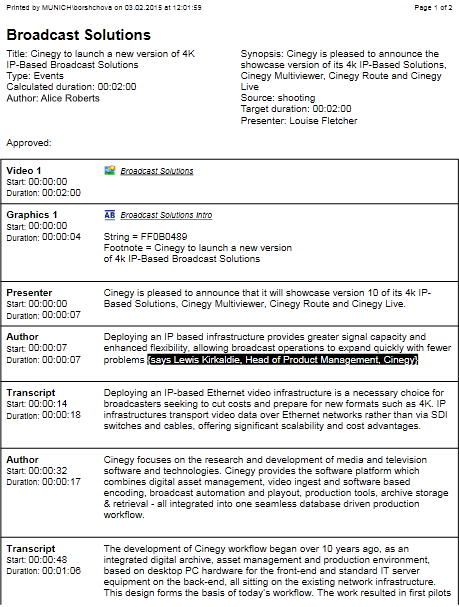