An overlay panel contains a set of buttons for controlling the use of graphics objects.

The buttons of a separate overlay are semi-transparent. They become completely visible only with the mouse pointer hovered over them. When pressed, all the buttons turn yellow.

The color frames of each overlay indicate the way they are currently being used: 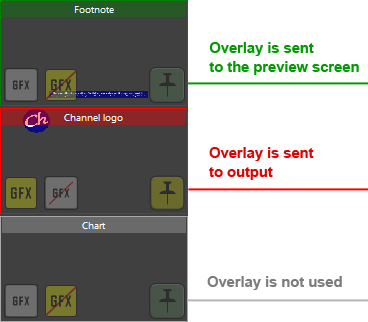 It is possible to use drag-and-drop to enable the overlay display in the preview or the output screens. The color of its frame will be changed correspondingly.

To add a new overlay, select the "Add Overlay…​" command from the overlay panel context menu:

The "Overlay Settings" dialog appears in which the overlay can be configured.

To remove an existing overlay, select the "Remove" command from the overlay panel context menu:

To duplicate the selected overlay, use its "Clone" context menu command:

The duplicated overlay will be placed after all the existing ones.