The simplest way to use an A140 is to attach a keyboard, and type the URL for the Amino control page hosted by Cinegy Route. With a keyboard attached, it is possible to press the F10 key to access a URL entry dialog (appears along the top-edge of the screen). Any reachable web-address can be entered here to test the Amino machine and the network behavior.

The above strap shows the virtual destination now mapped to a channel within a multi-program transport stream, and the Amino should be playing the specified channel. After approximately 10 seconds, the strap should disappear.

When any changes are made to the virtual destination, the Amino should change within approximately 1 second to the new destination, and the pop-up strap will temporarily re-appear to indicate the changed location again.

Once you are comfortable that the Amino unit is working correctly with the manually entered URL, you can choose to set the Amino default homepage (within the Alt+M management settings page) to this URL at start-up. If deploying multiple Amino units, you may wish to make a binding in the JavaScript file on the Route server to connect a specific Amino MAC address to a specific virtual destination – this is described in the later section about customizing the Amino HTML page.

Alternatively, as a more scalable and recommended method, you can customize a DHCP server available to direct any Amino to default or specific settings – which is discussed in the next section.

With a centralized DHCP server, it is possible to send parameters to all or specific Amino units as DHCP ‘OPTION’ messages. More details are provided within the Amino Installation & Configuration guide, including complete instructions for setting up a Linux-based DHCP server.

This section describes how to set up a Windows-based DHCP server using the integrated DHCP role available in Windows 2008 and later. It assumes the reader is comfortable with administering Windows DHCP, and has an operational understanding of the network technologies involved.

To configure Amino DHCP on a Windows server, follow the steps below:

The Amino manuals show the various codes available to inject here, but the four most useful ones are shown below:

The following table contains description of the four most useful codes:

The example of homepage URL to read the Amino control page from Cinegy Route is as follows:

The example of extra_options values is as follows:

Global scope options applied to all units (so all Amino boxes get the same firmware) look as follows:

If using IIS to host the firmware, a MIME type registered for this is also required: 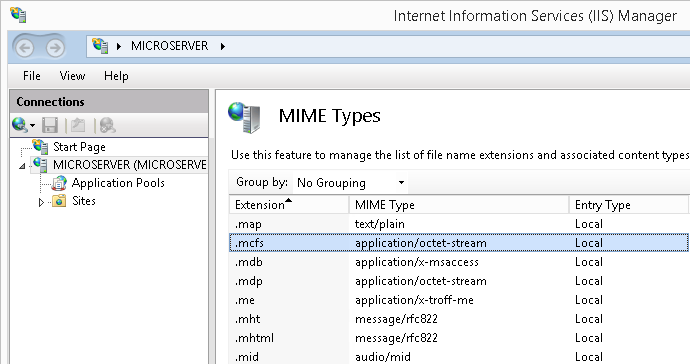 In a normal environment, using Cinegy Route – Amino integration, it is expected that each Amino box has a reservation, which tells it on boot "what" Cinegy Route virtual destination to bind to (and turns on/off on-screen logging and such).

The screenshot below displays the homepage being overridden for a specific Amino box: