The variable parts of the templates can be updated directly in other Cinegy applications.

When updated, the variable value can take effect according to the update type specified in the Cinegy Title application: 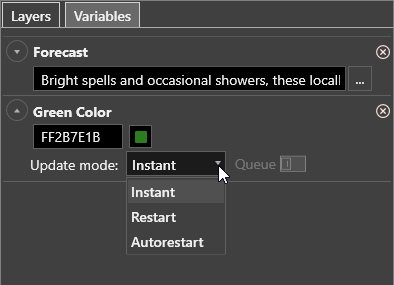 You can set the update type for a variable choosing one of the following variants:

If the variable is set to be updated after restart or autorestart, its applied values can be set up to wait in a queue until they are displayed. To enable this feature, select the "Queue" option for the corresponding variable(s). If this option is not set, only the last applied value will be displayed overwriting the values that have been applied before and are not yet updated.

It is possible to change the variable value (or variables list) in the Cinegy Title template dynamically for the items already on-air by sending an HTTP request to Cinegy Playout Engine. This feature is implemented via the 3-rd party dynamic data control application.

The 3-rd party application sends an HTTP request (POST) to Cinegy Playout Engine, where the Cinegy Title template is activated, using the XML file as the 'request body'. This XML file contains the Name/Value pairs for each variable needed to be updated.