The basic Cinegy support procedures and workflow are described in this post. Recommendations on achieving smooth and efficient support process and cooperation are provided throughout.

So what are the ways to register support requests?

The main page of the Cinegy Helpdesk portal looks as follows: 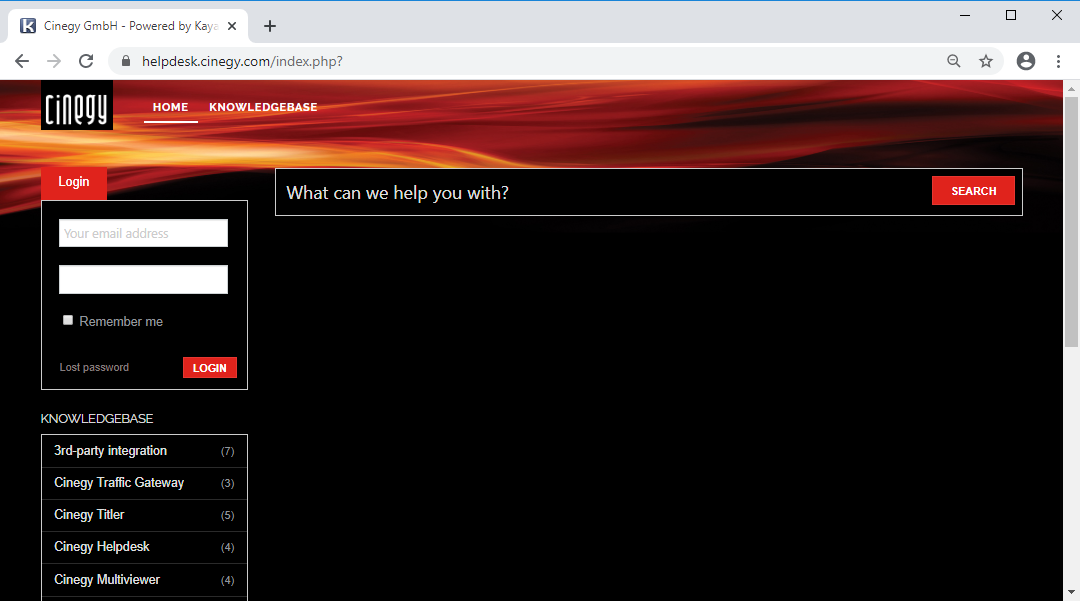 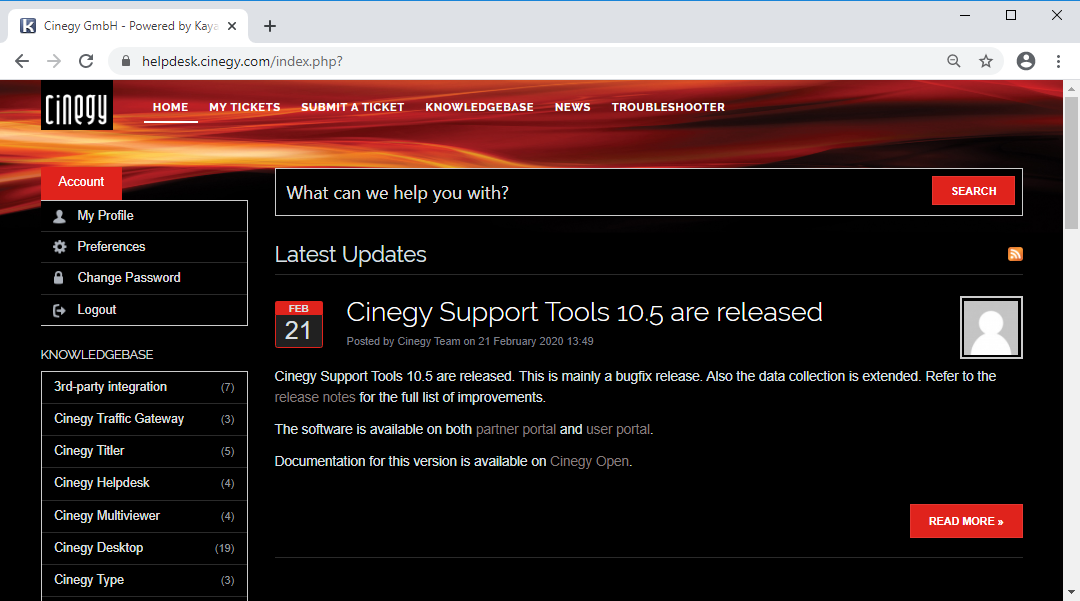 When creating a new ticket to speed up the support process, please provide detailed information on the issue itself and the customer/installation where it is topical. 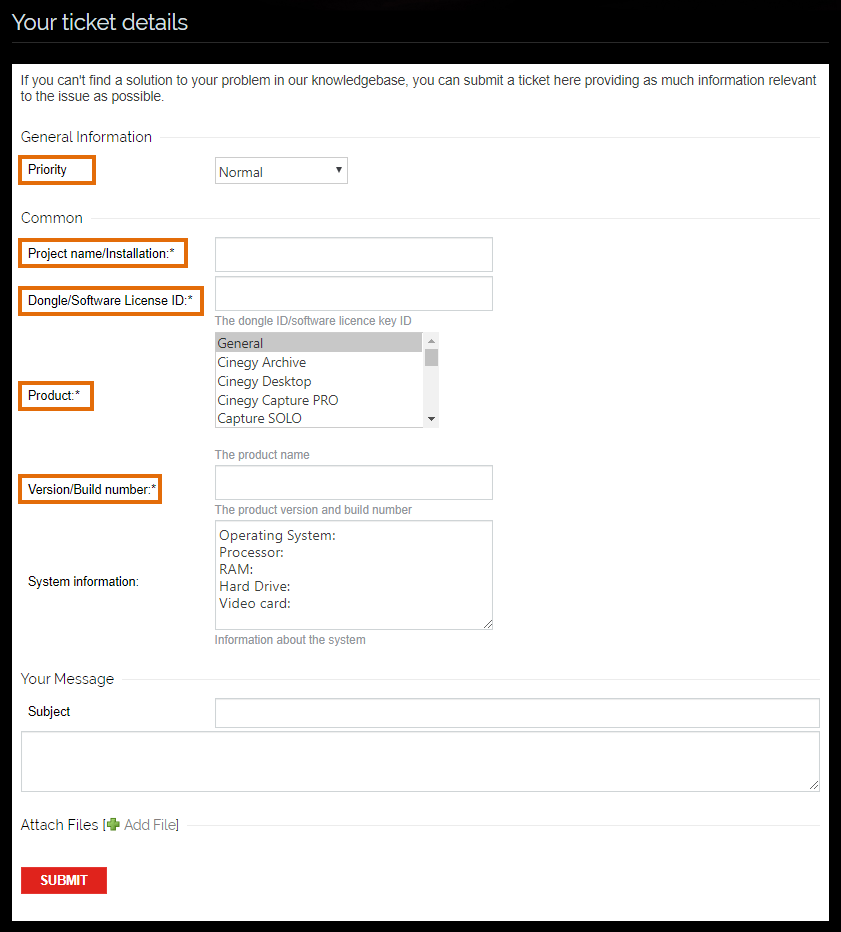 The following fields are mandatory and should be carefully filled in: Priority, Project name/installation, Dongle/Software License ID, Product and Version/Build number.

A software license ID can be verified in the Cinegy License Manager utility:

The tickets processing procedure will be explained in more details below.

Priority defines the ticket response timing and should be carefully selected to avoid "slow" support for critical issues. When logging an issue, customer will be asked to assign a priority level to their issue. Each ticket is assigned priority that defines the general ticket processing rules and response time limits.

It is important to correctly identify the product customer is having an issue with and its version. This will reduce the time required for the support team to confirm the issue and suggest a workaround or provide a fix.

When making each request, customer shall provide diagnostic information including but not limited to – hardware details (models, versions, drivers), workflow details (when specific actions are being performed), any logs and dumps from the corresponding product, etc.

If required information is not provided, it may be requested by the Cinegy support personnel.

The system will try to suggest you the articles from the Knowledgebase section that might be related to your problem. Please, review them before submitting your ticket to avoid duplication.

To collect the required technical info, we follow an identical procedure in every ticket, the same questions will be asked in different tickets to collect required data. The process of data collection could be a possible source of human errors as data is in different files/formats and locations.

Technical details are very important to speed up the support process. In order to help customers collect the required info automatically without possible human errors, Cinegy provides the Cinegy Support Tools package that consists of several applications. These tools are designed to detect possible issues and collect data automatically. The tools set is being actively extended – new versions will be published once additional features are added.

What are the benefits of Support Tools usage?

Once started, Cinegy Reporting Tool automatically scans the system and detects all Cinegy products installed in the system. For each of the product selected by the operator, technical details are collected into the report, which is further packaged as an archived file containing all information required for the support team to start the issue investigation – the machine hardware configuration, products with exact builds, log and dump files, etc. No special training is required to generate such a report. The data collection process is represented in a wizard-like form focusing the operator on a particular area on each step.

Having launched Cinegy Reporting Tool, on the "Welcome" page you will be asked to choose the report generation mode.

Cinegy Reporting Tool is provided in the form of a wizard that guides user through the simple steps allowing easy and convenient workflow.

The initial screen provides user with the general overview of the tool purpose and allows him to select one of two report generation modes: 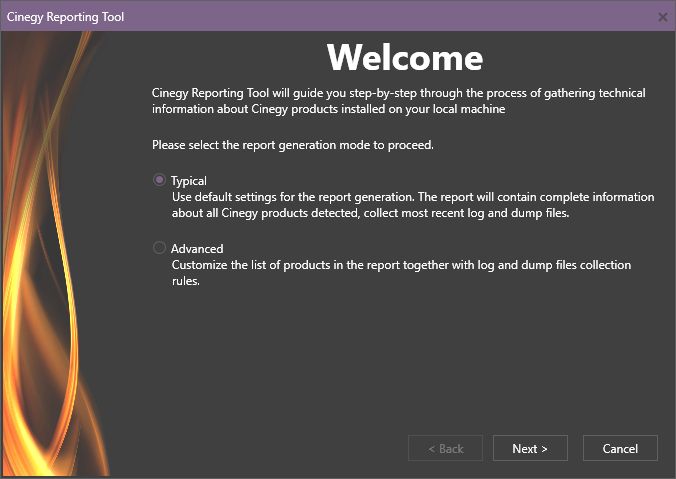 Cinegy Report Viewer is the second tool in the Cinegy Support Tools package.

The interface allows a support person (or anyone else) to open the report packages generated by Cinegy Reporting Tool and review the collected data in a human friendly form. 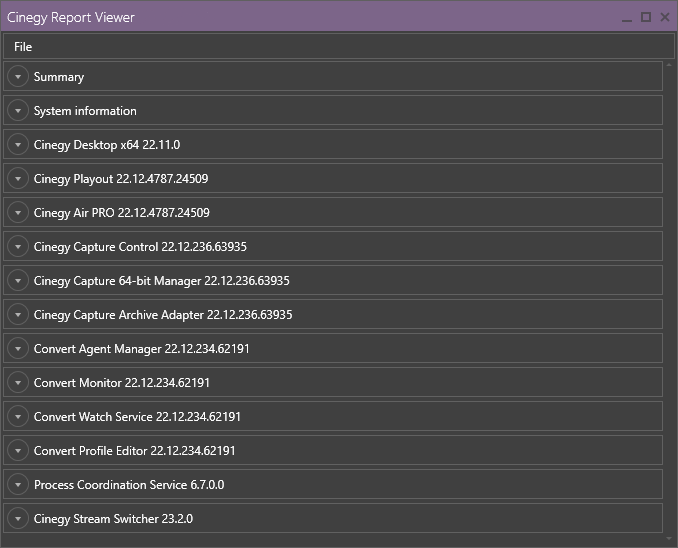 The collected data is grouped into different sections ensuring quick and simple analysis.

Virtually no skills are required to operate the viewer. However, technical training is required to interpret some data.

Once a report file is opened, Report Viewer will show the collected info grouped into sections that correspond to each Cinegy product included into the report.

Each section can be further expanded providing additional info on the selected product. Each section may contain the following information:

Processing the Ticket According to SLA

The support team should have a clear idea about the end customer SLA type and ticket priority. Based on this info, the response time limits are defined for the support process. The information about response timing is available in your SLA.

Initial response is the automatic reply from Cinegy Helpdesk after the ticket is registered in the system to acknowledge this fact and inform the customer about the ticket ID assigned to his request. This unique ID identifies the issue and should be present in all communications threads related to this issue.

After the initial response, the customer will receive notifications about new staff posts that should come within the defined feedback interval.

The support person will request the technical information that is essential for the ticket analysis. In case such information is not provided, we cannot guarantee the prompt ticket resolving. If the customer does not update the ticket with the required information, it will be closed in two weeks as expired.

So based on the info provided earlier, the initial ticket processing procedure is as follows:

Next updates to the ticket should fall into the defined feedback intervals.

The ticket will be closed when the fix or workaround is provided, and confirmation from the customer that the issue is solved is received.

The ticket will be closed as expired in case it is not updated from the customer’s side within two weeks from the post that requires actions on the customer’s side. The expiration period may be extended in case this is negotiated with the support team. In such case the explicit update date is defined when the support team will request status update.

The ticket may be closed on the customer’s request in case the issue is no longer topical and cannot be reproduced on both sides.

Resolution/investigation for the ticket has different stages:

It is important to know that Cinegy only supports the current released and immediate previous version of the product. Support for all other versions is not guaranteed, and customer will be advised to upgrade to the supported versions to continue issue investigation. It may also happen that the released versions already contain the fix for the issue raised in the ticket.

Once the issue is reproduced and identified as a defect in Cinegy software, the corresponding info will be added to the ticket. The ticket will be updated with the info about the fixing progress.

The ticket will be closed once the fix is provided to the customer and accepted or when the official product release containing the fix is published on the Cinegy User Portal / Cinegy Partner Portal.

The ticket may be re-opened by customer in case the issue is still topical and further processing is required.

According to the priorities and roadmap, the development team fixes the bugs:

The following diagram explains the feature request process between customer and Cinegy: 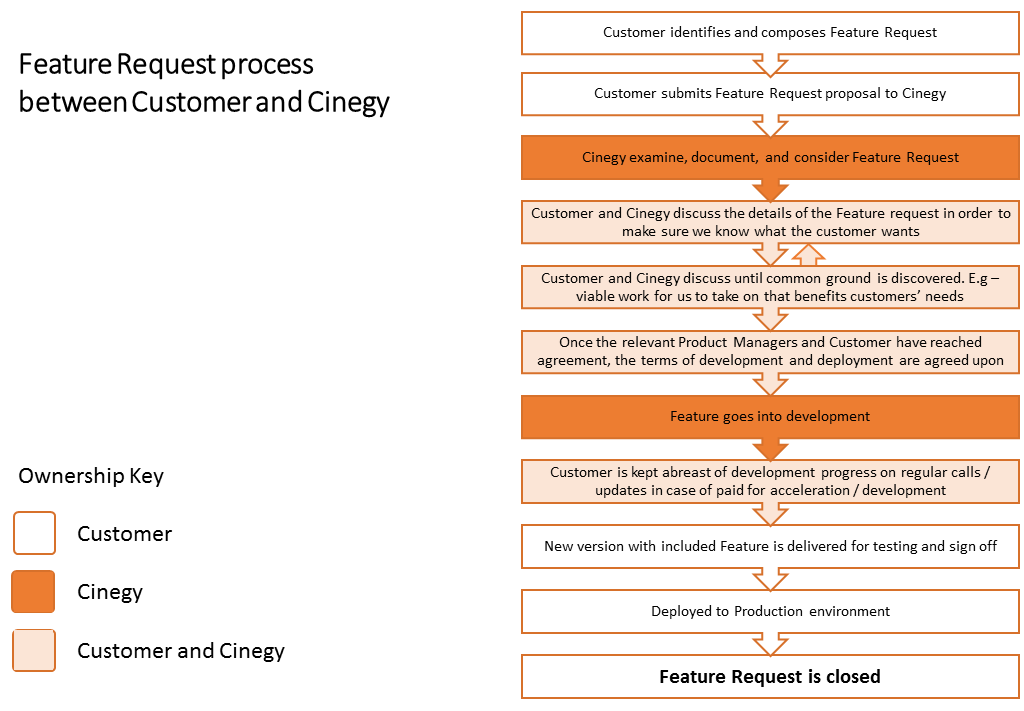 In case the issue is identified as a missing feature/new functionality request, its type is changed to feature request. The ticket will be closed by the support team redirecting customer to discuss the possible options with the responsible sales manager. Cinegy considers a customer feature request, and internally discusses its value.

Discussions between customer and Cinegy are initiated and proceed until clear understanding of the feature request scope is reached. Once the feature is accepted, it is put into the development roadmap.

In case feature implementation is accelerated by paid development, customer will be updated on the feature progress. Once the feature is implemented and the corresponding version of product is released, the feature request will be closed.