Cinegy software provides different components such as servers and clients. Depending on which tasks have been delegated to each component, the system recommendations will vary.

This article provides an overview of the principal system components needed and their corresponding recommendations. 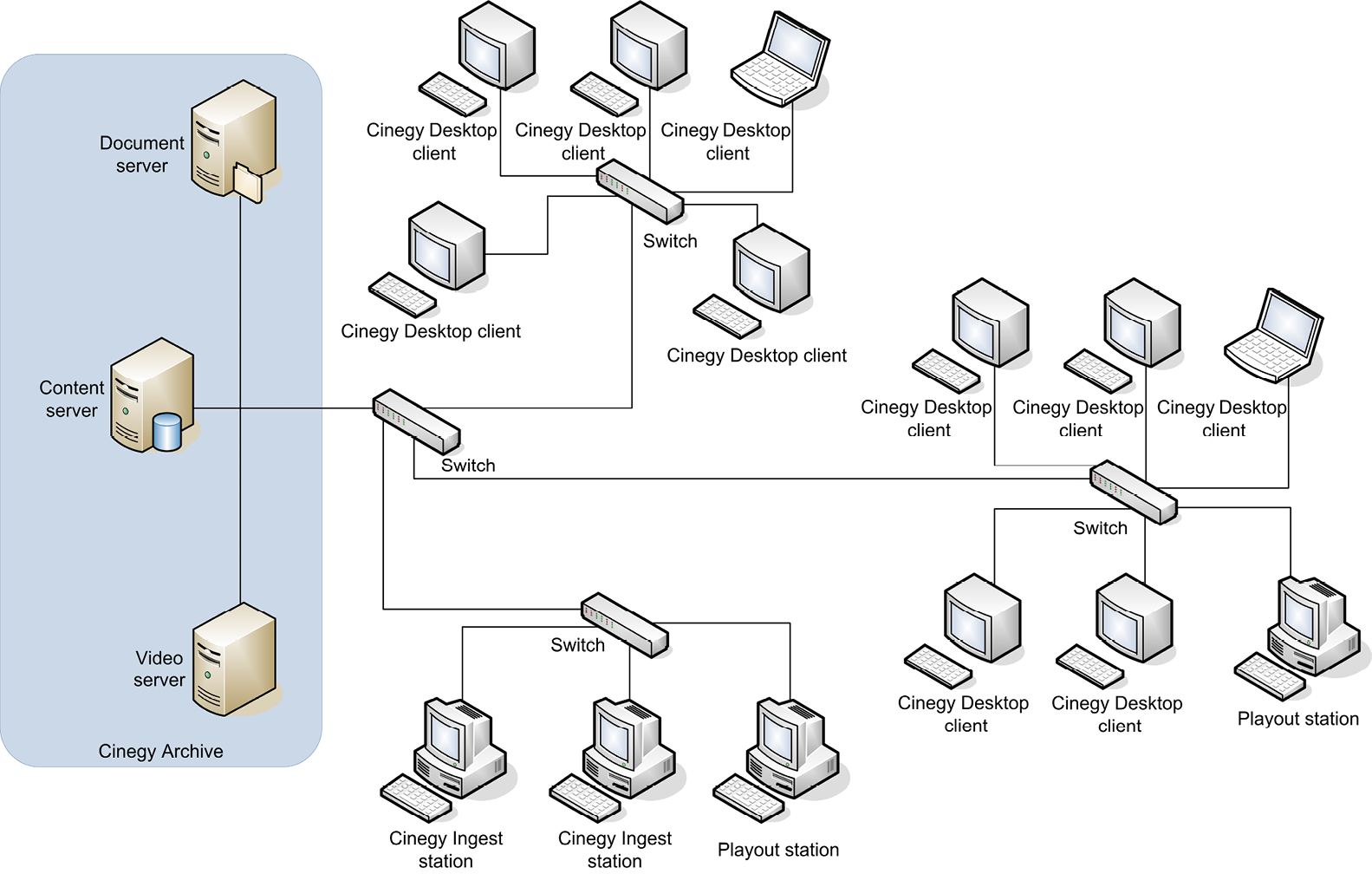 The Cinegy workflow environment is made up of the following components:

The performance of the SQL Server database is determined by the processor performance. As the total number of users grows and/or the size of the database itself, the amount of installed RAM and the speed of the disk I/O system and how it is configured, become increasingly important.

The following table gives an indication of what processing power is required in relation to the number of concurrent users on the Cinegy Archive SQL Server.

The number of users given in this table is estimated based on assumption that Cinegy Desktop client performs a range of tasks: search, browse, edit, logging, etc. If it is clear from the beginning that there will be a very large amount of searching with complex search queries, then the performance required will be much higher.

Cinegy Workspace users create less load on the database server than the average Cinegy Desktop user. Search queries from web users are serialized – queued – so in the worst case they have to wait. This is not the case with Cinegy Desktop search requests. Cinegy installations with more than 200 users have been deployed and are in use with even lower performance hardware than recommended in the table above. To be able to run the Cinegy system successfully and without performance issues, the rights and roles management of the Cinegy Archive database can be used to determine which user can do what. By limiting rights to powerful features available in the system, administrators can help limit possible performance bottlenecks.

This is not as important with small installations, but when building systems for more than 30 users, choosing the right disk layout can give a considerable boost of performance at very little extra cost. For example, using different disks for temp files, log files, the database itself and so forth will improve overall throughput by allowing the system to separate these tasks to dedicated disks. When building an I/O subsystem for a database one should also remember that the read/write performance is often secondary to the number of I/Os the subsystem can perform per second. The data that is written to a database in general does not exceed 8k per write, so formatting a volume with 64k block size for use with a database is counterproductive.

A cluster typically consists of two machines that form one new virtual machine. One of the cluster machines will be active and the other will be passive standing by in case of an emergency. If the active machine were to fail, then the passive machine will take over and become the active one itself. The signaling of the state of the machines is done by a dedicated Ethernet "heartbeat" cable that connects the two machines.

This shared storage, the Quorum disk, which is usually a RAID5 system that has two SCSI or FibreChannel adapters allowing both machines to be connected at the same time. The important issue to remember when building a cluster is that all components need to be cluster capable. This is especially important for the storage adapters and for the storage subsystem itself. Every major server vendor can provide a list of clustering capable hardware they sell.

The Cinegy Archive video server has to support the streaming request of all users and accommodate for all the qualities in use. The most important recommendations are high performance network adapter and connection (1GB LAN or a fiber channel connection). A good quality RAID system should be installed to provide fast access to the data. The disk recommendations really depend on your own individual needs and you should calculate this generously considering the number of users and the streaming qualities you are planning to use.