Cinegy Capture v14 is the next major release of the Cinegy Capture family, featuring a bundle of new useful features as well as important fixes and enhancements.

Don’t just take our word for it - Cinegy Capture v14 was honored with a Best of Show award at IBC2019.

Version 14 builds on the 10 year history of Cinegy Capture, adding some new features that we would like to draw your attention toward. For those short of time, below is a condensed headline list of the top enhancements added, with links to the relevant manual pages for them:

More Details on the Updates – 'The long read section'

As with the Cinegy Air 14 post, here are a few more details about the features we think will bring the biggest impact to our customers, along with some extra background information about why these improvements are important.

At Cinegy, we’ve been demonstrating 8K prototypes and previews at trade-shows for over four years now. During that time, we have been busying finding where all the bottlenecks are in a system, as you might expect when you try and push 64-times the volume of data through applications designed when standard HD was still new. Obviously, once we found these bottlenecks, we then had to fix them…​

With v14, we now have another shipping product supporting 8K (up to 7680×4320p50/59.94) as a native format in the same way it can support any other. If you are lucky enough to have a camera supporting 8K (for example, the lovely Sharp 8C-B60A we used at IBC this year) you can feed this in via a Blackmagic Design DeckLink 8K Pro.

Of course, recording production-grade 8K is no easy task - so one of those 'bottlenecks' we encountered required us to make our very own GPU-accelerated codec to solve the problem - Daniel2. At IBC, we managed to record a beautiful 3Gbps 8K 10-bit 4:2:2 signal using an older dual-CPU Xeon E5-2630-v3 by adding in an NVIDIA Quadro RTX4000 board. If you want to see this exact setup, follow this link to a poorly shot video on a cellphone of Lewis at IBC.

Naturally, enhancements added to support 8K within the product have real benefits to downstream formats - with UHD performance, particularly when working with GPU accelerated codecs is dramatically enhanced.

If you would also like to learn a little more about the technical challenges of adding 8K to a product, or how you might want to play back any such content - take a look at the 8K support section of the Air v14 post published earlier this year.

With this protocol, you can get the benefits normally enjoyed from working with traditional MPEG Transport Stream based I/O but without the limits of multicast configurations or worrying about packet loss if the network is not perfect. You can read more about this in the previously linked SRT feature from the Air 14 post - but this is the perfect technology for people looking to move into the cloud, or to reduce the footprint of multicast streaming around a site.

As well as SRT, Webcams are now also available as an input source. While nobody is likely to win an Emmy with a webcam, this feature is still very useful for working in the field or just in labs and demos. You can see the configuration is just a simple wizard step below:

Telemetry is introduced to Cinegy Capture Manager, allowing deep analysis and monitoring of the application on remote servers.

Customers are increasingly looking to centralize information about their systems, and the addition of log streaming from Capture allows the processing and querying of activity to produce lovely, centralized dashboards using open-source tools like Grafana:

Customers can share our centralized telemetry system if they don’t want to go to the trouble of setting up their own system, or they can self-host (or use any pre-existing) ElasticSearch systems. If anyone wants to do this but doesn’t know where to start - just drop an email to Cinegy Professional Services and we can help arrange consultation or training to get you started with these systems.

The design of the Cinegy Capture Control application has been revised and improved. An Engines Panel dashboard has been implemented to track real-time engine performance with two additional advanced dashboard modes that you can see below. Both of these panel types help provide visual warning indicators for monitoring engines, so you can see if there are issues and clearly spot problems:

Above you can see the panels in 'detailed' mode that are presented in a grid format associated with the feedback preview monitors - exactly the mode you would want if you are trying to monitor multiple recording engines from one panel. The displayed engine parameters shown in either the compact dashboard mode or detailed dashboard mode can be customized allowing a comfortable and relevant detail level: 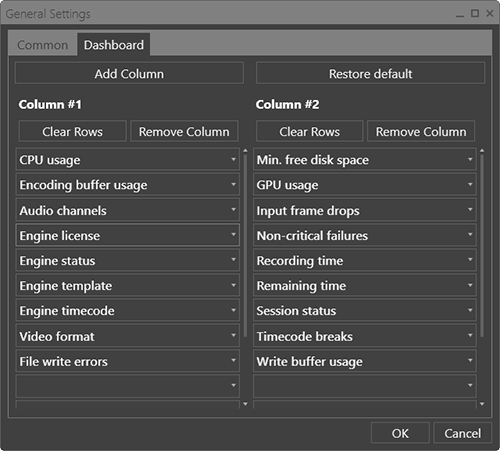 As well as accessing this information from the panels display alongside preview streams, we have also added a new panel in the main control area which displays information for whatever is the currently selected engine. This new Engine Monitor panel is a better choice when drilling into some specific preview while checking the status of recordings - such as reacting to some network storage going offline.

Cinegy has expanded the range of available codecs and containers by supporting MPEG-TS (.ts) as a container, the *XAVC Intra 100 codec and enabling ingest to Cinegy Archive using H.264/H.264 GPU content in an MXF container.

As well as adding these extra media options, you can now generate reference AAF files, that can be used to much more easily load material into the Avid platform when clips have been split into elementary OP-Atom MXF files: 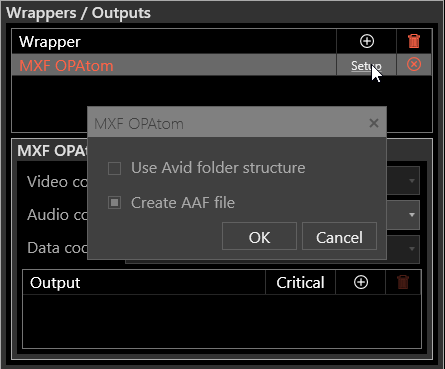 Watermark imprinting is introduced, which imprints an image (ideally an image with an alpha-channel) on selected encodings for recording into any media files generated. The main use-case for this is to burn any logo or branding imaging into content in a permanent manner at source, and so by setting this up on a per-encoding basis we can support split-flows where a broadcast master file might be unbranded, but all lower-quality proxy content is marked.

You can see how this is simply configured here: 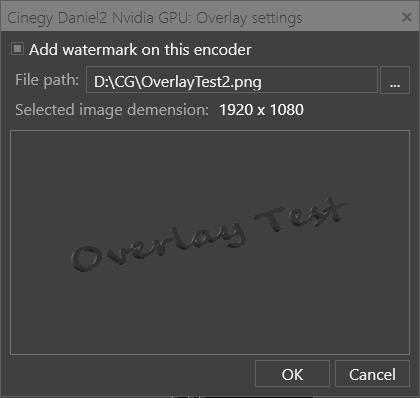