To do this, right-click the video track of the clip with the effect applied (it has the FX symbol as its clip name prefix) and choose the "Effects" > "Copy effects" context menu command:

Select the video clip (or multiple clips when holding the Shift key down) to which the effect should be copied and choose the "Paste effects…​" option from the "Effects" context menu.

The following dialog box will appear asking you to confirm your decision about copying the current effect to the selected clips: 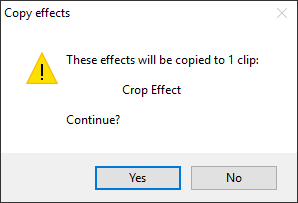 Press "Yes" to continue or "No" to cancel the effect copying process.

If the clip (or clips) to which you are trying to copy the current effect already has any effect, the following dialog box will appear asking you to make a choice from the following options:

Press "Cancel" in order not to make any changes in the destination clip(s).

To remove all the effects from the video clip, right-click its video track on Timeline and select the "Clear all effects…​" option from the "Effects" context menu. The following message will appear asking you to confirm your decision:

Press "Yes" to continue or "No" to leave the current effects in the clips.

It is also possible to remove the effects from multiple clips. To do this, select several clips on Timeline holding the Ctrl or Shift key down and choose the "Effects" > "Clear all effects…​" context menu command.